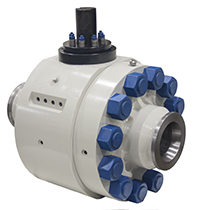 Background: The customer placed a large order for High Integrity Pressure Protection System (HIPPS) trunnion valves, which were 8” class 2500. These valves are used in oil and gas high-pressure production lines to protect against surges from the well. The scope was a total of 20 valves which were needed for the expansion of their gas field. Their excellent experience with ValvTechnologies’ on a previous order influenced them to choose our services again.

Requirement: The traditional method to provide protection against over pressure is a safety relief valve (SRV). Per code, the SRV needs to have a capacity equal to the well capacity without any restriction in the choke. This can become impractically large. Protection with SRV-s numerous drawbacks, which include:

Upon closing of the HIPPS valves the down stream pressure is likely drop below the pressure safety threshold. Nevertheless, the HIPPS valves do not automatically re-open. Instead, a local, manual reset feature needs to be engaged forcing the operator to do a local, visual inspection and correction of the issue that caused the over pressure before allowing flow to restart. A key feature of HIPPS is the ‘spec break’, the transition from the high pressure piping to the lower pressure system. The spec break is indicated on the P&ID near the second HIPPS-valve.

Most importantly, a HIPPS is tightly regulated system, subject to regulatory oversight and stands alone to protect a piping system against over pressure and consequent potential for catastrophic failure, loss of life, loss of assets and damage to the environment.