APPLICATION: The process of refining crude oil has transformed the lives of countless people and cultures over the last 100 years. As various length hydrocarbo 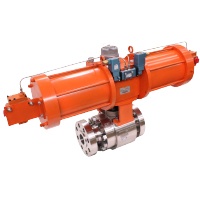 n chains are extracted in a distillation tower and bound for a myriad of uses, the remainder of the crude oil ultimately settles into a state called coke. Striving to recover every last ounce of energy from the hydrocarbons, the coke is processed in coking and delayed coking units which provide both solids and gases for downstream industrial applications. The residual solids from the coking process are still highly energy-rich, but difficult to refine into usable product. To squeeze more energy and product from the coking residuals, the gasification process was born. Gasification reacts the coke residuals in a controlled environment to break down the polymers. After gasification is performed, the outflow from the gasifier contains both char and syngas. While the char has little monetary value, the syngas can be sold commercially for use within the plant for other applications, including power generation and chemical production.

BACKGROUND: Several different methods exist to separate char (the soot-like byproduct from the combustion in the gasification reactor) from syngas, but a common method is to use a filter to collect the char as the syngas flows through. The char is returned to the char reactor and the syngas can then flow downstream to its destined use. Typical filters are mesh-type to capture any particle beyond a certain size. These filters, however, suffer from the issue of the char building up a cake (a buildup of char on the filter opposing flow) of char on the upstream side of the filter, reducing the flow through the filter. To remove the cake, one demonstrated method is to use a pulse of syngas against the flow of the unit, into the filter, to cause the char cake on the underside of the filter to break up and then fall back into the reactor, as shown in Figure 1. This method allows the built-up char to be removed autonomously during unit operation and does not create any additional outflow to be handled.

SOLUTION: ValvTechnologies designed and manufactures a pulsejet valve to control the flow of syngas needed to disrupt the formation of the char cake. The valve satisfies the service conditions for operation of eight months or more, depending on the actual cycle time of the valve. To develop the most robust solution, ValvTechnologies designed the valve to meet the end user service requirements and agreed to some of the harshest requirements available. A subset of the total requirements included the following: 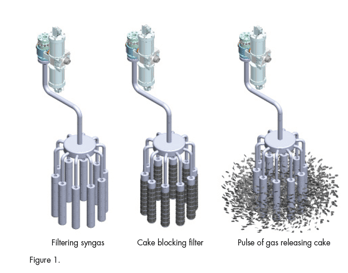 The requirement on cycle time for a three-inch line is based on the requirement to provide a pulse of gas that is both fast enough to bridge the gap to the filter but also voluminous enough to impact the filters with enough force to break the cake off the outside of the filter. The parameters of each pulse of syngas have been calibrated by an independent organization such that the pieces of cake are both large enough to fall back into the reactor, but also small enough to break away easily. The ball valve is the preferred geometry for this application because of the round, straight through port, delivering the best flow profile with the lowest back pressure. In application, the gas flows upward through the filters, allowing gravity to carry the broken cake away from the filter naturally, as shown in Figure 1.

PRODUCT: The valve used to create the burst of syngas is based on a trunnion valve design with stems both above and below the ball. Combined with the trunnion blocks, the position of the ball is secured within the body, and the rotation of the stems is held tightly to the centerline with bushings in place to minimize metal-to-metal contact and galling as shown in Figure 2.

Due to the required cycle time, the motion of a traditional quarter-turn ball valve is unable

to properly control the flow of gas, as the valve stops in the fully open position as it must change directions to go from opening to closing. To overcome this, the pulsejet uses a special actuator which allows the ball to rotate 180°, not stopping in the fully-open position. In rotating the ball through 180°, the actuator places the downstream side of the ball against the upstream seat and the upstream side of the ball against the downstream seat, requiring a ball lapped completely around to both upstream and downstream seats.

Rotating through 180° for a three-inch ball in 0.75 seconds will exceed the PV (pressure - velocity) limit for many materials, which results in galling. The PV limit is commonly used in bearings and defines the highest combination of load (pressure) and speed (velocity) under which the material will successfully operate. ValvTechnologies selected a material which combines the toughness to serve as a seat but also a strong enough set of material properties to remain below the PV limit and avoid galling at the speeds and under the loads that valve experiences when it cycles.

One of the requirements that the pulsejet must meet is compliance to ISO 15848. Fugitive emissions requirements are quickly becoming one of the most crucial topics in the valve industry. With increasing regulation, safety and environmental concerns and operational efficiency, it is easy to understand why these requirements exist. Even for a standard valve, achieving a fugitive emissions’ certificate per ISO 15848 is not a simple task. In the case of the pulsejet valve, which cycles much faster and more frequently than a standard valve, the task is even more daunting.

During testing, it was identified that the seals initially selected would not meet the ISO 15848 requirements. ValvTechnologies partnered with the industry leader in the design and manufacturing of engineered polymer solutions to develop the proprietary EcoPack® stem sealing solution. Not only does this seal meet ISO 15848-1 type testing requirements, but was additionally tested at the strenuous operating conditions of actual operation. The result is a certified seal which also goes above and beyond ISO to meet customer-specific leakage requirements.

A major milestone in the development of the revision of the product was the addition of the lower stem. This moved the valve from a pseudo trunnion into a true trunnion design, providing additional support for the ball during rigorous cycling. The product also benefited from the addition of dowel pins added between the trunnion blocks and the body and end cap to reduce the relative motion between these parts to nearly zero. The pinned components now hold the ball in a fixed cage, with the trunnion blocks above and below and the body and end cap on their respective sides. The stems can pass through the trunnion blocks to rotate the ball as shown in Figure 2. The seat was improved to have a larger contact area with the ball and a longer body, which helped to stabilize the seat in the seat pocket. Bushings were added on both the upper and lower stems and a lower bonnet was added as well, allowing the lower stem to be installed from the underside of the valve.

In application, the pulsejet valve cycles approximately every 90 seconds. Over an eight-month target life, this is roughly 250,000 cycles. ValvTechnologies’ test facility was configured to test two pulsejet valves simultaneously, at 450°F and under a closed valve differential pressure of 1160 psi. In total, 10 valve seat materials were tested, clocking millions of cycles across several rebuilds of each valve. Lab tests were performed at a faster cycle rate than in application, to help expedite the results to find the final solution. Typical lab cycle time varied over time, but averaged around six to nine seconds per cycle. The leakage across each seat was tested daily and tracked with leakage beyond 100 liters per minute at 1160 psi deemed unacceptable for a sustained period of time. Early tests only completed 25,000 or 30,000 cycles, where later materials were achieving closer to 100,000 cycles. The final winner was able to achieve over 210,000 cycles. The success of the material was immediately identified, and the design was put into production to get it to the customer as quickly as possible.

BENEFIT: The installed base of ValvTechnologies’ valves has reduced lost time, savings in maintenance, prevented employee injuries and damage to property. The service group established a Master Service Agreement, allowing all techs to maintain access to the plant for any work that may be needed on a planned and unplanned basis.